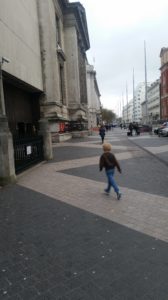 No queues and off to see the dinosaurs

I remember when I saw the job advertised for a ‘Dawnosaurs Programme Co-ordinator’ back in July 2015, it was a first sign that the Natural History Museum (NHM) in London were going to put on early opening for children on the autism spectrum and their families. I don’t know if you have ever seen the queues outside the NHM on a Saturday. They are huge, massive, the museum bursts and throngs with hundreds of families eager to immerse themselves in dino bones. 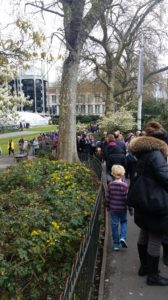 As we leave the queues snake past the gardens, on and on

My family have never been one of those families. I remember a long time ago trying to take my oldest daughter, we were on the dinosaur walkway, high up. Bright spotlights picking out the dinosaurs, some animatronic, their furtive movements catching the corner of your eye. The walkway was crammed and bustling with so many people. The noise was a gradual low rumble and then as we neared the end I could see my daughter wasn’t enjoying it anymore. The more I tried to draw her attention to moving dinosaurs the more she retreated into herself.

We could hear the T-Rex and I realised it wasn’t going to work, a big mistake to bring her to this busy place, but no easy way to go back with so many people behind us. I couldn’t bear to go forward, I couldn’t see what was coming. I scanned about for an escape route, finally we were able to duck under a rope and avoid the T-Rex. It was not a good visit. I remember feeling angry at all those other families having a ‘normal’ visit. I wanted that, I didn’t want our trip to be stressful and difficult and upsetting, but it was and we have never been back.

It was only some years after that my daughter was diagnosed with autism and suddenly days like that make a lot more sense to me now. I understand how days out to new places fill her with anxiety and completely drain her. I understand her need to avoid the over busy and crowded spaces, to have the reassurance of a way out and to know what is coming.

Now I have three kids and we have still never visited the NHM together, I took my youngest before he started at school, I still fondly remember how he wore his dino back pack and pointed excitedly up at Mary Anning’s incredible fossils. But I want that for all three of my kids, not the impossible, just what other families have.

Now you can see why I was so excited to see that job advertised, it was even more exciting to be contacted by Ronel Verwoerd who got the job! I came into the NHM a couple of times to share our experiences, not only what can be difficult but what has worked well at other autism early openings we have visited. Chatting to Ronel and looking over plans it is clear how tricky it can be in a large museum to bring in autism events. It does take a lot of planning, training, team work and most importantly communication to get things off the ground.

The NHM Dawnosuars morning opens at 8am, two hours before normal opening. It is aways a struggle to get up to London that early on a weekend but my kids were so excited I had no trouble in waking them. There is the added bonus of quieter tube and train rides when coming in early, we have done this journey quite a few times to get to the Science Museum early opening. Repetition and familiarity are starting to make those journeys much easier.

Coming into the Exhibition Road entrance we were met by really friendly staff who made us instantly feel welcome. We were given awesome dino pin badges but also with the flexibility of not having to wear them if it was a problem. The flexibility extended to us parents allowing us to come in with takeaway coffee, we need a little more than excitement to get us through an early morning start.

Just being in the building was such a thrill, instantly Sophie the Stegosaurus captured their attention. We were given maps of the areas open and a timeline of events, activities and locations. There were lots of friendly staff around who not only made us feel welcome but pointed us in the right direction when we needed it.

Activities were on the ground and lower ground floor, this made it a lot easier to navigate and not lose my other half when the kids wanted to go off in different directions. The map clearly highlighted galleries that were closed and we took a slow route round to the dinosaurs. The first activity we came to was some simple dino stencil drawing. I was amazed my youngest son (5) wanted to stop and draw. It is not like him to try anything arts and crafts, I think the double draw of dinos and easy to hold attractive looking stencils pulled him in. We must have stood there for 15 minutes while he coloured and we helped the girls build a 3D puzzle of a stegosaurus. It was also fantastic to get a chance to hold some replica dinosaur bones. This simple activity was not something he would have ever done in a busy crowded museum, he would have been overwhelmed. He asked me to help spell out his dinosaurs name and ‘Rexy’ was completed.

Whilst simpler activities occupied our youngest, the girls were drawn to microfossils. They had the chance to meet a scientist and using a microscope make a slide of their own to take home. There was a beautiful moment when I mentioned to the facilitator that it was our first visit and my daughter finds it hard with the crowds. He told her he understood, he told her he was autistic too and asked if in a crowded room she always looked for a way out as he does. She agreed with him. Here she had a connection not only with a role model, an adult with autism, but also an adult who understands, who ‘gets it’. I don’t think she has actually met any adults who have told her they have autism, I can’t tell you what a powerful things this is for a 12 year old girl just trying to understand herself and what her autism means to her.

My husband took the youngest to look at the creepy crawlies and insects and we met up ready to explore the dinosaurs. Whilst the T-Rex was too much for my youngest there were no crowds to push past to leave. We tried, it didn’t work, it was fine. The revelation was my daughter who, on meeting the T-Rex, instead of running in the opposite direction whipped out her phone to take a few pictures. The route to the T-Rex has changed, not having the build up and crowds made it so much more achievable.

The NHM also play to their strengths by having sessions with live animals, these are the kind of events we would never get into. We were running a bit late but staff escorted us straight there and made it easy for us to join the session. The kids got to meet a giant snail, an albino snake and a meerkat. Whilst the youngest did not want to touch, the relaxed atmosphere and low numbers reduced the pressure. I am sure repeated exposure would give him the confidence to take part and I hope the NHM will continue to run the sessions with Ranger Stu.

Before we realised it the museum was already opening to the general public, staff gave us plenty of warning and we managed to grab a fairly quiet coffee at 10am when the cafe opened as visitors started to filter in. Refreshed, we managed to find more time and sufficient energy to hit the Sensory Room and Investigate Centre which were the final rooms kept open for Dawnosaurs us till 11am as the rest of the museum was given over to the general public. 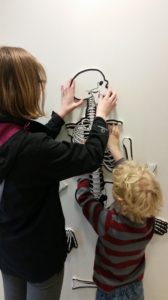 We stared up close at bones, fossils and seeds before, finally exhausted, we made our way home. Our first trip to the NHM together was a success, low numbers, reduced crowds, all the thought and preparation made it work. As we left and wandered past the massive crowds outside it made me appreciate Dawnosaurs and the NHM staff even more. 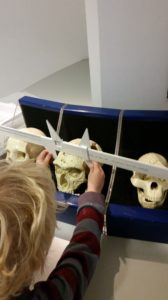 Museums like the NHM are busy and successful, sometimes that is not enough. They need to look at new ways to reach excluded audiences, to inspire the next generation of scientists, biologists and naturalists. Access to museums is not just about collections but access to role models too. Autistic children face difficulties it is true, but their gifts and potential are huge, sometimes they just need the right setting, the right person and a little belief in them to realise that potential.

The next Dawnosaurs runs on 14th May 2016, it is fully booked but to register your interest for future events please take a look at the website  – http://www.nhm.ac.uk/visit/whats-on/programs/nhm/dawnosaurs.html or email dawnosaurs@nhm.ac.uk.