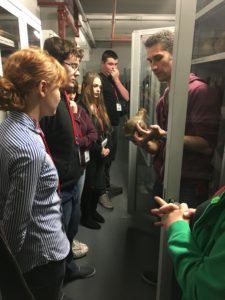 In 2017 I was privileged to work on a volunteer project with the Museum of London archive and a charity called CASPA who support autistic children, young people and families living in Bromley, South London. For 8 weeks, 8 young people aged between 16-22 came into the archive in Hackney for one day a week as part of a long established Volunteer Inclusion Project at the Museum of London. 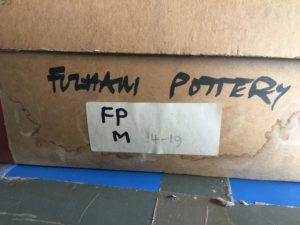 Archaeology from Fulham Pottery in need of re-packing

The project focussed on 17th century stoneware medallions that formed part of drinking vessels made on the site of the Fulham Pottery in West London. The site was originally excavated in the 1970s but the excavated material needed to be brought up to current collection care standards. The aim of the project was to repack and organise the boxes of medallions to improve storage and accessibility of finds in the archive as well as create extra storage space. 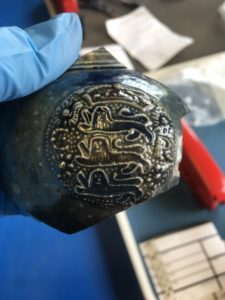 Medallions varied from letters to animals and flower designs

The group also had to photograph and catalogue the objects to improve digital access to the site. The culmination of the project was a final day at the Museum of London Docklands undertaking a public engagement session. This day would see the group sharing objects from the site and talking to members of the public about what they had learned about Fulham Pottery and the different tasks they had been carrying out. 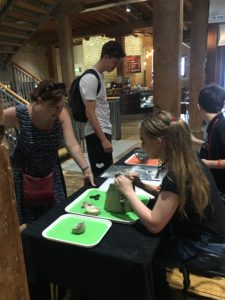 The final day of public engagement

In this blog I am going to summarise some of the top tips we have learnt from working with young autistic adults in a museum archive setting. 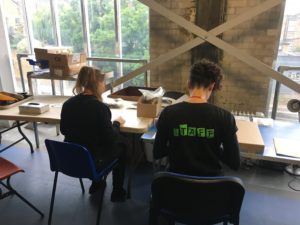 Helen and Sarah from CASPA joined us each day

This is probably the single most important point. CASPA staff were crucial to the success of the project, they chaperoned the young people up to London each week. Travel on the tube or train can be very difficult for autistic people coping with new places, anxiety and sensory overload. CASPA staff knew the group really well, they helped us get the best from everyone and Museum of London staff learnt a lot from observing the way they worked.

Choosing a local group can help create a sustainable partnership, they may also be able to provide training and awareness session for staff that can benefit your whole museum.

It is also an important point to make that the project came about because I sent a list of family autism events to CASPA, but they told me what they really needed was work experience for their young people who aren’t in further education, training or work. Asking what the charity actually needed brought about a more fruitful partnership. 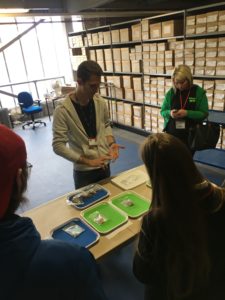 Obviously the work of each week was planned out but we built in a lot of flexibility for the group to make it a success. At the end of each day staff evaluated what had gone well and what needed to change. We introduced shorter days to avoid travelling into and out of London at peak rush hour. We included a pre-project visit to familiarise volunteers with the route and the building to alleviate anxiety. CASPA staff also took photos of the building and tasks involved to provide visual support for volunteers.

We also made sure to include lots of hands-on elements to the project, not just talking. The routine of sorting, packing and data entry became a familiar theme to most weeks. 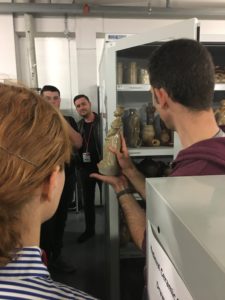 Part of the flexibility and evaluation during the project led to breaking the day up into shorter chunks to maintain momentum when we noticed some of the group really flagging in the afternoon sessions. Lunch was reduced to 45 minutes as this seemed to work better with the group. We also often finished the day on a more high energy activity such as a tour of an area of the store.

4 – Getting the right amount of staff and volunteer support 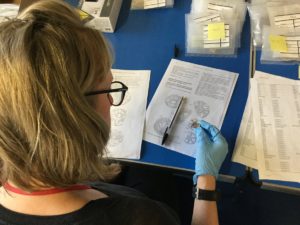 I enjoyed working 1-2-1 with members of the group

Each autistic person is different, you can’t make assumptions about the support the group will or won’t need. We had a Museum of London Volunteer Manager, a volunteer (me) and a member of CASPA management supporting the group each week. This allowed me to work 1-2-1 with a member of the group who just needed a little bit more support. It was fantastic to see how some of the group emerged as leaders over the process, with one young man even chaperoning the group into London on his own towards the end of the project.

5 – Build in the regular stuff 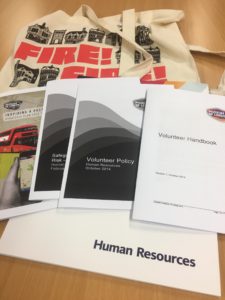 It was important to build in the regular volunteer processes

We wanted this project to be more like work experience for these young people, not only so they could add something to the CV but also so they could gain experience of vital work/life skills. It was really important to build in regular processes, like form filling and team working. There were a number of steps we took to make potential hurdles more achievable.

There is a lot of form filling that volunteers need to do so we got them to summarise their details on one form on a pre-visit. Staff then copied this onto multiple forms to streamline the process. To be faced with a whole morning of admin on the first day can be incredibly daunting so we worked to minimise anxiety on the first week.

We did introduce evaluation at several points throughout the project so that Team CASPA did become used to filling out forms. We started small with just three questions, avoiding questions that focussed on emotion or feelings. Simple direct language worked best. So for example rather than asking about what they had enjoyed so far we asked if they had talked about what they had been doing with someone at home.

We were really keen not to make things too easy or overcompensate if something was a challenge in order to create a real work experience environment. This was probably the hardest balance to find and dependent on the group. 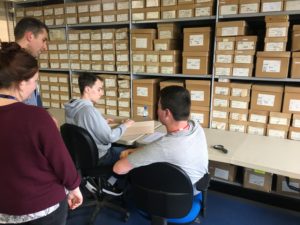 Spending time with other people was an important aspect of the project. Social communication is an area that many autistic people struggle with – lack of eye contact, understanding facial expressions, sarcasm and jokes can be problematic. Practising working in groups really pushed everyone to take part and join in. Getting the right size of group was key so we often moved from working in large groups to pairs, mixing it up each week so everyone had to work with different members of the group. This really challenged their social skills. 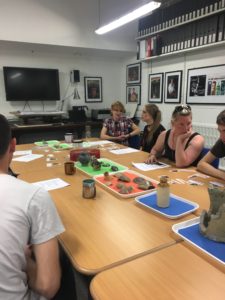 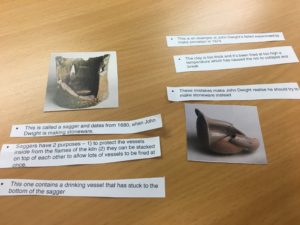 For most of the volunteers the idea of public engagement was, understandably, the most challenging. We introduced the idea of talking to the public gradually throughout the project little by little every week building knowledge. They began by practising exercises to work on social interaction skills to help the group gain confidence in speaking in public. So simply in pairs telling the other person what they had for breakfast and asking them the same question. We then went round the room and shared what our partner had for breakfast. This was repeated for something they had done in the week that they were really proud of and finally asking their partner one thing they could remember about the Fulham Pottery site or the work they had been doing. Information was presented in engaging ways through games and puzzles to break down the detail into manageable chunks. 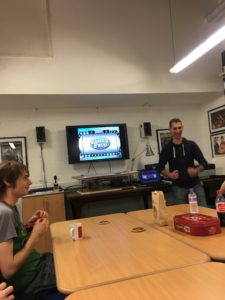 It was important to make it fun and enjoyable, not revision for a test. Towards the end of the project they took part in a matching game to match facts about the artefacts to images and finally each volunteer was given a crib sheet of notes. A pre-visit to the Museum of London Docklands site also helped relieve anxieties over the journey and unknown spaces. 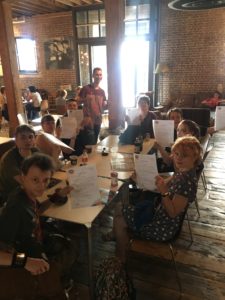 After a successful day of public engagement

The project was a great success for museum staff and volunteers. The museum improved their collections, increased digitisation and engagement with archive material. The group repacked, photographed and catalogue over 400 objects. The museum staff learnt a huge amount from working with CASPA staff and the project won two London Volunteering in Museums Awards. 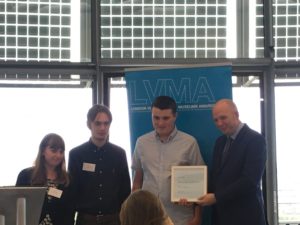 The volunteers gained new skills, not only understanding how an archive works and how to repack and catalogue but also improved computer and communication skills. There was a huge sense of pride and accomplishment from facing fears, not only in talking to the public but also for some simply travelling into London. There were some fantastic wellbeing benefits fed back to the Museum of London staff from CASPA including members of the group who were now joining in at dinner time at home. Some of the group even stayed on to get involved in other projects at the museum. 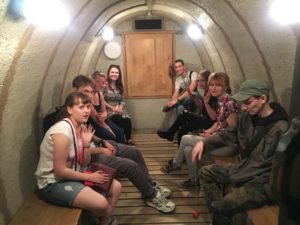 Good fun was had by all

Perhaps the most long lasting impact of the Team CASPA project was good fun, new friends, happy memories and laughter. From making simple adaptions to an existing volunteer programme and partnering with a local autism charity, the Museum of London has,  I hope, made a really positive impact on the lives of 8 young autistic adults who are just starting out. A little bit of support that will give them the experience and confidence to go on to bigger and better things.

With huge thanks to Museum of London Staff Adam Corsini and Lucy Creighton who made Team Caspa happen and who helped pull together this top tips blog.

To find out more about CASPA please take a look at their website https://www.caspabromley.org.uk/