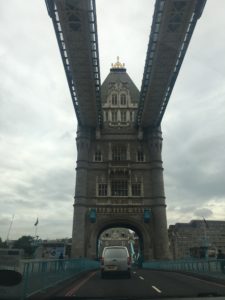 Over the bridge we go

Just the thought of being a tourist in my own city often fills me with a sense of dread. The Tower of London, Buckingham Palace, the London Eye, all those people and all those queues. It is too much, too busy and too overwhelming for my autistic daughter. It often means we don’t even try.

Tower Bridge was one of those places I never thought we would get to. To be honest just the thought of those winding stairs or lift up to the walkway put me off. The new glass floor- no chance I thought. My youngest child has developed a fear of heights where even going up and down stairs can cause problems.

But Tower Bridge offer early opening for autistic visitors, it was worth a shot, even though I thought it would end in disaster. We booked a slot at 9am, an hour before the exhibition opens to the public. Greeted by staff in an empty reception area we opted for a lift up. As we got straight in and the lift wasn’t crowded we seemed to avoid the usual anxiety.

The first section is a video

The booklet kept my youngest occupied

In the first section we got to watch a short video and my three were given a booklet to fill in. This was a great distraction for the youngest who added his own illustrations to a drawing of the Thames and Tower Bridge. Next we walked along the East Walkway, daughter number two asked to download the Tower Bridge App which she thoroughly enjoyed playing, there were some lovely mini games and augmented reality which allowed her to see the bridge opening beneath her feet.

There is a glass walkway which allows you to see down to the road, 42 metres below. It is quite disconcerting to walk across it, you can opt to walk along the side if you don’t fancy standing on the glass. As the walkway was so quiet it gave us plenty of time to build up to walking on it. To be frank, the kids amazed me and it wasn’t long before tentative steps became brazen laying face first on the floor!

Go on you can do it! 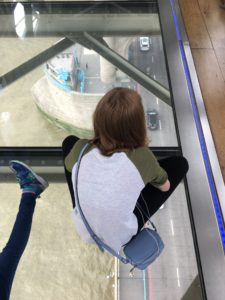 The lovely Howard, on duty on the East Walkway, kept us entertained with lots of facts and figures. One side of the bridge is in the borough of Southwark, the other is in Tower Hamlets, you can get married in the Tower Hamlets side but not the Southwark side! Whilst I watched my son in amazement on the glass walkway Howard told us that it may have only taken 5 weeks to install but it took 4 years to get agreement from all the relevant parties concerned – Tower Hamlets Council, Southwark Council, Transport for London who are responsible for the road and the Port of London Authority who are in charge of the river Thames. We also learnt that the opening parts of the bridge are called ‘bascules’, french for ‘see-saw’ which will no doubt come in useful if we go to France on summer holidays.

Views of the Shard

The views are spectacular and I couldn’t resist a snap of the Shard peaking through the clouds. We moved to the West Walkway where another guide, Robert, told us of the dramatic leap of the number 78 bus which jumped the bridge on Boxing Day in 1952. There were some activities on the walkway too, number two daughter built a suspension bridge and number one son got to do a little construction (and destruction) of his own.

The final stop was across the bridge and down into the engine rooms where we played a few more games on the app. We all had a go on the interactive game and it was a lot harder than you would think to balance coal and oil to open the bridge and keep an eye on the traffic on the bridge and under it too.

Off down to the engine rooms

This games was harder than it looked!

By chance when we left we were just in time to watch the bridge opening from the South Bank, a perfect excuse for ice cream and time to watch a tall ship go through the ‘bascules’.  I can honestly say we had a lot more fun than I thought we would. Seeing the kids confidence grow as they walked across the glass walkway was a real highlight.

Fantastic to see a ship pass through

As we left I sneaked a peek in the exhibition entrance which was now packed with tourists. I doubt visiting in regular hours we would have had the same experience. We spoke to another family who could only visit because of the low numbers and more relaxed environment. 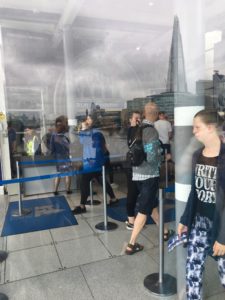 After 10am the crowds build up

There are more dates on the website for relaxed openings and you can also see the visual story to help you prepare for your visit. I recommend downloading the free app which proved a great distraction. 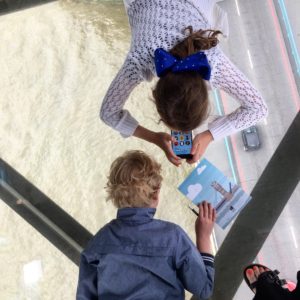 They started off so tentative but became so brazen!

I had forgotten how much fun it is to be a tourist for the day and Tower Bridge really surpassed our expectations. You can never predict with autism, you can never say never. As a parent you have to be careful that you don’t put up your own barriers as you never know when your child will surprise you.

We received complimentary tickets on our visit.